5 Best Movie Moments on the Thames 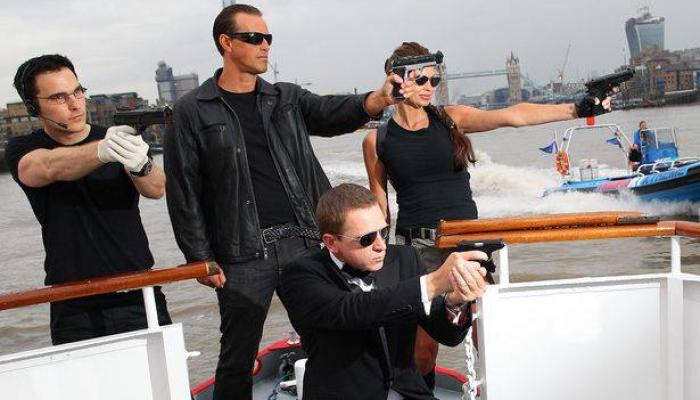 It is no surprise that the iconic twists and turns of the River Thames have been the filming location for many well-known movies over the years. Bridget Jones walks across the famous Tower Bridge in Bridget Jones' Diary, passing over the river as life and love fall neatly into place (for the total of two minutes), whilst in The Flood (2007) the river plays a star role as a devastating tidal surge travels into the Thames Estuary and overwhelms the Thames Barrier, putting the city's lives at risk. From rom-coms to disasters, the river's scenes are always pivotal and quintessentially English. Here are our 5 Best Movie Moments on the Thames.

1 - Harry Potter and the Half-Blood Prince

The Harry Potter films have featured scenes on the Thames more than once in their history, but arguably the most memorable is its moment in Harry potter and the Half-Blood Prince. The opening scene of the movie shows the London Millennium Bridge collapsing under an attack from the Death Eaters in a mass Muggle killing ordered by Voldemort. In real life however, this pedestrian-only bridge crosses the Thames to link Bankside with the city and up until now has been Death Eater-free

2 - Pirates of the Caribbean: On Stranger Tides

The fourth movie in the Pirates of the Caribbean franchise begins with scenes set in Greenwich's Old Royal Naval College, which sits on the south bank of the Thames. In the film, Jack Sparrow and Angelica (played by Johnny Depp and Penelope Cruz) make a narrow escape from the Captain's Daughter tavern, exiting through a conveniently places trap door which lands them in the river. Early on in the film's development there were plans to set the scenes during the depths of winter to recreate the famous 'Frost Fairs' which used to be held on the Thames when the river froze over, but due to budget cuts the idea was replaced by a much greyer (and undoubtedly realistic) London aesthetic.

3 - James Bond - The World is not Enough

Possibly the most famous production that the river has ever seen, the action sequence in The World is not Enough encompasses some of London's major landmarks from The O2 Dome to the MI5 Building at Vauxhall. Pierce Brosnan, the Bond of  the day, shoots a memorable boat chase along the river with a generous handful of crashes and explosions, at the end of which a beautiful woman kills herself - of course.

5 - Indiana Jones and the Last Crusade

Who would have thought that the boat chase in Indiana Jones and the Last Crusade was filmed in Essex! The Tilbury Docks set the scene for this major Hollywood movie which sees the famous Mr Jones, played by Harrison Ford, in a gripping boat chase. Though the scene is set in Venice, the sequence was shot on the Thames generating much interest during filming. The Docks were also the filming location for The Gotham Docks in Batman Begins.

The River Thames has been the setting for many memorable scenes in movie history and will continue to be one of the most iconic locations for filming in London. Whilst we're glad that the life-threatening craters and Death Eater attacks remain strictly confined to the movies (for now), we can't help thinking that a real life boat chase along the Thames would be pretty cool...