Hippo on the River Thames! 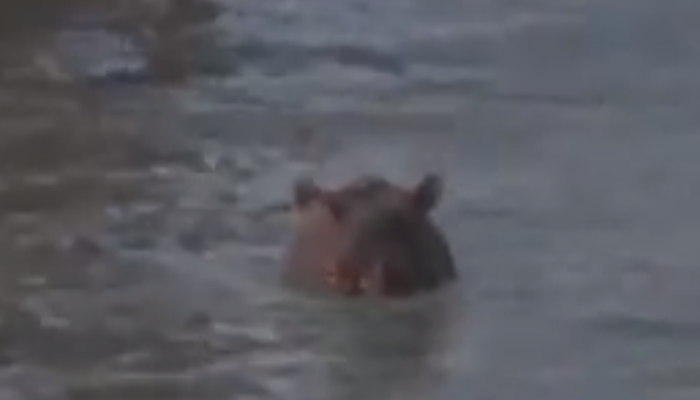 All was not as it seemed this morning on the River Thames as social networking sites were abuzz with the news that some unusual wildlife had been spotted swimming in the waters near Tower Bridge. A scarily convincing video of shaky amateur footage had us momentarily fooled that a hippo had been spotted by tourists from a river boat cruise and was shared around sites like Twitter this morning. Obviously, we picked up on the April Fools' Day joke within seconds. We definitely didn't text our friends to tell them the incredible news...

The video was released on YouTube as part of a practical joke by the Natural History Museum, who wrote an article on their site stating that the 'Amateur YouTube film footage appears to show a live hippopotamus swimming in London's River Thames' and added the small detail that ZSL London Zoo had planned to move two hippos to a new enclosure around the time that the video went live. The fake footage has had over 21,000 views so far and a growing number of mentions from confused and ever-so-slightly- gullible users on sites such as Twitter and Facebook.

However, there is a little truth behind the stunt - the museum is displaying a new exhibition titled 'Britain: One Million Years of the Human Story' which has a collection of hippopotamus fossils pulled from the Thames, proving that these exotic creatures did once roam the banks of river. For now, though, we can safety assume that the river is hippo-free - so don't go planning any exotic wildlife adventures on the Thames just yet.