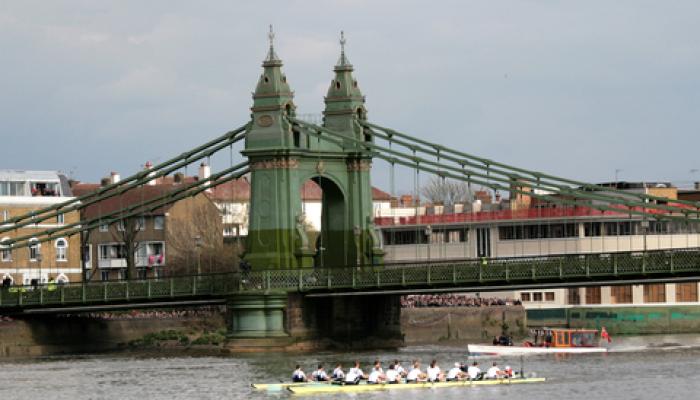 This Sunday April 6th sees the Cambridge light blues take on the Oxford dark blues in the 160th BNY Mellon Men's Boat Race. The two universities will clash again on the Championship Course between Putney and Mortlake for a 4 mile race along the Thames. In the 185 year history of the race, Cambridge has come away with 81 victories to Oxford's 77. Last year Oxford stroked to victory redeeming their loss after the botched affair that was the 2012 boat race.

In the most controversial race in a colourful history of rivalry, the 2012 race was disrupted by protestor Trenton Oldfield who swam into the path of the boats. The race was halted just as Oxford made a decisive push at the Chiswick Eyot that would have secured the lead. The re-started race saw Cambridge surge to victory with Oxford trailing behind after a clash where Oxford lost an oar.

After the debacle of 2012, the traditional rivalry has reached an even higher pitch. The 2013 race saw a heavier Oxford team lead by two thirds of a length past the Chiswick Steps. As the river began to turn in Cambridge's favour, the dark blues surged forward with a sustained push, winning the race.

On Sunday March 20th in the Newton Women's race, Oxford completed their third win in a row on the Henley Course. Next year, the women's race is set to move to the Tideway along with the men's. After last year's loss in the men's race and the still raw defeat of last week's women's race. Cambridge will surely be upping their game and bringing a strong and determined team to this Sunday's race.

The 160th race will see a heavier, younger Cambridge take on a lighter, more experienced Oxford crew. The Oxford line-up looks intimidating with three Olympic medallists on the team. Canadian President Malcolm Howard won Gold in the 2008 Beijing Olympics and Silver in the London 2012 games, whilst New Zealander Storm Uru is both a World Champion and Olympic Bronze medallist from London 2012. Oxford also has Brit Constantine Louloudis at stroke who won Bronze at London 2012.

The race starts at 5:55pm on Sunday 6th April and is live on BBC1. Entertainment and large screens will be set-up in Bishop's Park and Furnivall Gardens for those of you that want to make a day out of it. Or you could try and secure a spot on one of London's bridges if you get there early enough. Putney Bridge provides a great spot to the watch the start, Hammersmith Bridge is about halfway and Chiswick Bridge is within sigh of the finish.