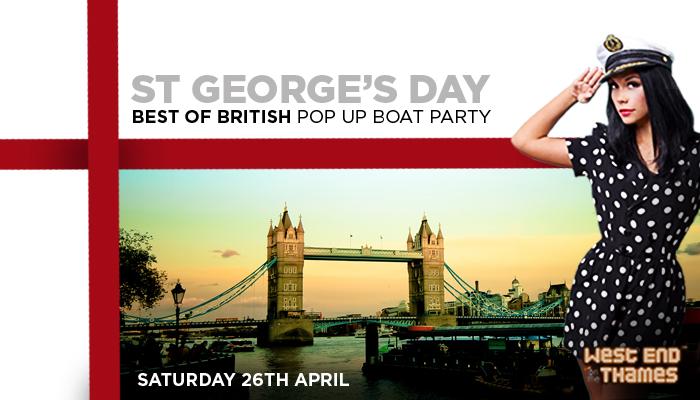 Britishness. In the past it's been a dirty word, probably due to our habit for ramming-it-down-the-throats of most of the world, pilfering from the natives and batting them over the head with a rolled-up copy of The Times until they learnt to be appropriately prudish.

But that's all in the past! Britain is now the multicultural hub it's always had the potential to be and London in particular offers among the widest variety of cultural experiences and cuisine of anywhere in the world. That's why, with so much competing culture added to the melting-pot that is London, now is the time to be a championing Britishness and sharing our glorious culture with the world. And what better way to do it than aboard a West End on the Thames Pop-up Party boat!

Yes Britishness is definitely in vogue. After years of ribbon-cutting and lukewarm waving, her Royal Highness reminded us that when Royalty parties, it does it in style, dazzling the world with her magnificent jubilee. The entire nation took to the streets to have millions of cake sales and swig gallons of Pimms. It even rained quite a bit! Ahh bliss. The celebration was like a week-long version of the Queen's speech, and we loved every minute of it.

It's great to see the Royals are finally getting up off their...thrones and bringing a bit of glitz to royalty at long last. William and Kate literally 'sexed up' the monarchy last year and spawned our new future King and ruler (reigner?). But shouldn't the institution that is Great Britain be celebrated more than just on the Queen's jubilee? The Irish have set an excellent example by stubbornly not working on St Patrick's Day for centuries, gulping down Guinness by the factory-load and adorning their freckly heads with totally impractical, giant novelty hats. Surely we deserve to enjoy such shenanigans in the name of Britain too?

That's why this year, West End on the Thames will not be blindly failing to notice the hallowed day that is St George's Day and will instead be marking this prestigious occasion with a party of monumental proportions! It's time we started celebrating how one of Jesus' lesser known disciples (more of a roadie really) got tired washing Jesus' sandals and set off on a party boat to discover England, slaying the dragon that had been eating all the Anglo Saxons and making Christianity cool again (I'm pretty sure that's how the legend goes).

So if you're looking for a venue to celebrate England day, hop on to the West End on the Thames Pop-up Party boat on Saturday 26th April (just like George did). There will be ample opportunity for balderdash, ribaldry and other such tomfoolery, all in the name of good ol' England. It's going to be more fun than Mary Berry, Prince Harry and Paddington Bear thrown into a blender and downed in one!

In collaboration with voucher meisters Groupon, West End on the Thames will be enforcing patriotism by order of Her Majesty from 7-11pm. Once the Pop-up Party departs from Westminster Pier for its four hour cruise, you'll be treated to a complimentary shot of that popular traditional English tipple, Sambuca! Fish 'n' chips will be served aboard the boat and washed down with a free beer. There will be a photographer on hand to capture every moment of mayhem and DJ entertainment playing the best in R&B, Funky House and Club Classics.

So if you think April needs livening up, join the movement and lets make the St George's Day weekend a holiday that will live on in infamy. Tally-ho!

Click here to see more information about the event.