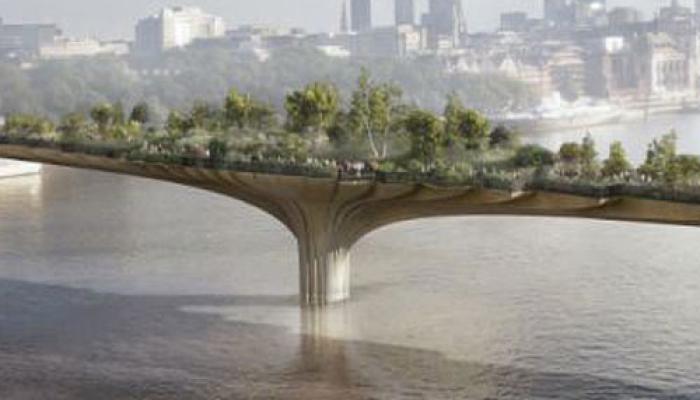 Something unusual is blooming in London.  The seed was originally planted in 1998 when British actress and campaigner, Joanna Lumley, promoted her vision for a glorious garden bridge across the Thames as a memorial to Princess Diana. However, it has taken until now for the vision to well and truly come to life as Lambeth Council has just granted planning permission for the bridge to go ahead.

It will provide a quick and scenic route to and from Waterloo Station, linking the West End and Covent Garden on the North Bank with the television studios and art scene on the South Bank. The creator of its' impressive design is the mastermind behind the Olympic Cauldron, Thomas Heatherwick. He predicts the new bridge to be ‘a key landmark and tourist attraction linking both riverbanks.’ In essence, it will be functional for commuters but a quiet place to linger for those biding their time.

In a dynamic city dominated by commerce, business and bustling bodies, The Garden Bridge will provide a breath of fresh air and a striking addition to the River Thames. It will display 270 trees representing 45 species from across Britain and Northern Europe, as well as shrubs, hedges and flowers all chosen specifically for their ability to withstand exposed and windy conditions.

Reflecting a city that is constantly growing and reinventing itself, The Garden Bridge will no doubt be a prominent feature of the river once it is finished and a joy to behold from one of our boats. You will be in for a wait though, as work isn’t due to begin until December next year and predicted completion is not until 2018… We can’t wait for this garden to come to life!

By Rachel Bentley, an online content writer for the West End on the Thames