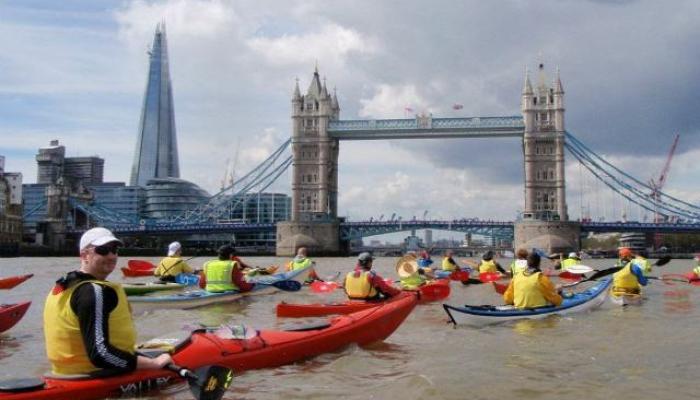 Forget the London Marathon. Who wants to watch a load of sweaty overweight people collapsing from dehydration and suffocating inside giant mascot suits? Not us! Although, the causes they are supporting are very admirable and some of those athletes are at peak physical condition. However, here at West End on the Thames we will be following a very different event!

The 2014 Kayakathon is a marathon length (shhh) paddle down the River Thames on April 13th at the same time as the London marathon. Over one hundred kayakers will depart from beneath Tower Bridge and the flotilla of do-gooders will go the distance in a group, raising money for a host of charitable causes and making the world a better place generally, all on the city's greatest highway, the Thames! So join the fun and swap 'chronic knee syndrome' and sweaty crotches for 'paddlers elbow' and a damp bum! Only the experienced kayaker may partake, so no newbies on the water please. Spectators won't be entirely isolated from the London Marathon (joggers passing above the start line on Tower Bridge will herald the start of the race). But to enjoy a beautiful Spring day and take in the capital from the water, join the fun for the 2014 Kayakathon.

£50.00 for a single entry and £90.00 for a tandem will get you your place on the water and make a real difference to the charities involved. The route will take you past The Houses of Parliament, London Eye, the Tower of London and many other spectacular London landmarks before returning after lunch on the ebb tide. A perfect way to spend a Sunday!